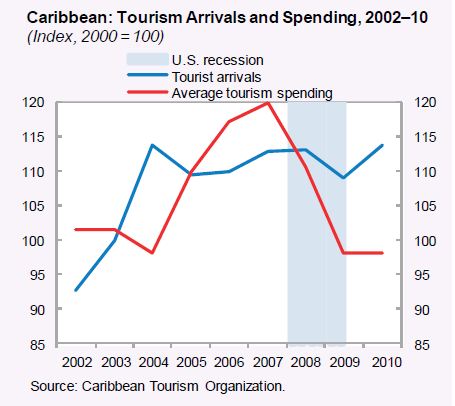 Given slower economic growth and persistently high unemployment rates in the US and Europe — both key generating markets for tourism to Latin America and the Caribbean, it is not surprising that the IMF is forecasting slower tourism growth as well. In fact, for much of the Caribbean, the region is already experiencing weak tourism flows. According to the IMF, tourist arrivals have generally been increasing since mid-2009 in the Latin America and the Caribbean, but spending per tourist has dropped to 2004 levels.

To recapture lost revenue over the last two years, several Caribbean countries instituted a variety of tax measures, a few of which are worth repeating here:

Barbados
(1) Increased VAT from 15% to 17.5%; (2) eliminated tax-free allowances for travel and entertainment