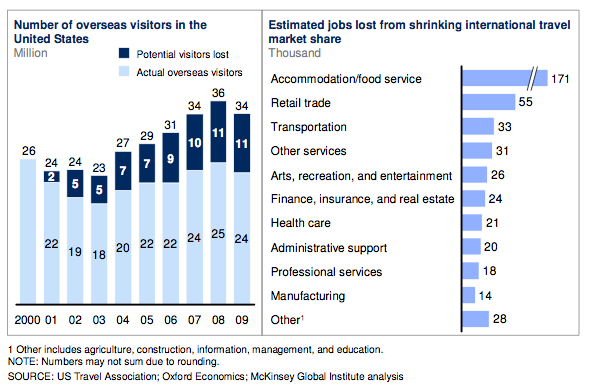 In the US, the Labor Day holiday was this past Monday, a time to ponder the high unemployment rate and sigh over the sad fact that no jobs were added in August — zero! This summer, though, Fortune magazine, The Atlantic and the Washington Post pointed to tourism as a path to job growth.

Hmm…more people unemployed, less tourism, so it would seem nonsensical to claim that tourism is a yellow brick road to growth and prosperity for the nation. Ahh…but not if the visitors were coming from abroad, from lands of stronger exchange rates, plentiful disposable income and longer vacations. Since 911, the US has lost its share of the international market. Regaining this share will create jobs and help fund much needed infrastructure throughout the country.

Editorials this summer in Fortune magazine, The Atlantic and Washington Post cited international tourism as an under-recognized path to prosperity and jobs in the US.

In The Atlantic, Senior Editor Derek Thompson wrote that the past decade for the US has been a “lost decade” in tourism because while international tourism grew by 46 million, the US actually lost 2.4 million visitors, which cost the country 440,000 jobs and half a trillion dollars in travel spending.[1] How did this happen? The reasons are well known by now, 911 led to security policies which scared away families, it became harder and more expensive to get US visas and, while Europe and others increased travel promotion budgets, the US did not. This is not surprising given that the US is the only OECD country without a national tourism policy and travel promotion strategy.

Bill Marriott writing in Fortune Magazine expressed similar sentiments. He said that if the US could boost international visitation by 10 per cent, over 100,000 new jobs would be created. And, he continued, that “for every dollar spent for travel and hotels, there is a multiplier effect of visitors shopping on Fifth Avenue or eating out at great New York City restaurants that also juices the economy.”[2]

And Fareed Zakaria agreed, writing in the Washington Post recently that tourism is one of the largest growth industries in America and yet the US has lost global market share especially due to the visa issue.[3]

Roger Dow, CEO of the US Travel Association, has been critical of the US visa process. He has said that ““It’s an antiquated visa process,” said Dow, “that often drives international travelers to other countries. We are imposing unnecessary barriers on international visitors, and that inhibits our economic growth. And if we institute a smarter visa policy, we can create 1.3 million jobs.”Lessons Learned

While visas may not be as much of a barrier to entry for most other countries, the lost market share experienced by the US provides two sorely learned lessons:

1) Security can’t be ignored, but make it as easy as possible for people to visit. Otherwise your economic “security” is at risk. For the US, this means streamlining the visa process, especially for visitors from Brazil and China, which are not visa waiver countries.

2) Don’t cut travel promotion budgets. These investments pay off well in excess of the original amounts through job growth, increased tax revenues and increased throughout the economy.